Now that we've created a rich theme based on Bedrock, let's add support to it for another new feature in Concrete version 9: theme skins. Theme skins are a way of added pre-built variations on a theme, based on different source variables and the same general SASS files. Skins are pre-compiled, meaning they're very fast, and you don't need to even support or require theme customization to use them. That means you can ship a custom, fully optimized theme with skins included, and still allow administrators the option of using skins on their site. You can even choose different skins at different page levels.

Examples of Skins in Atomik

Atomik (our default theme in version 9) ships with two skins. 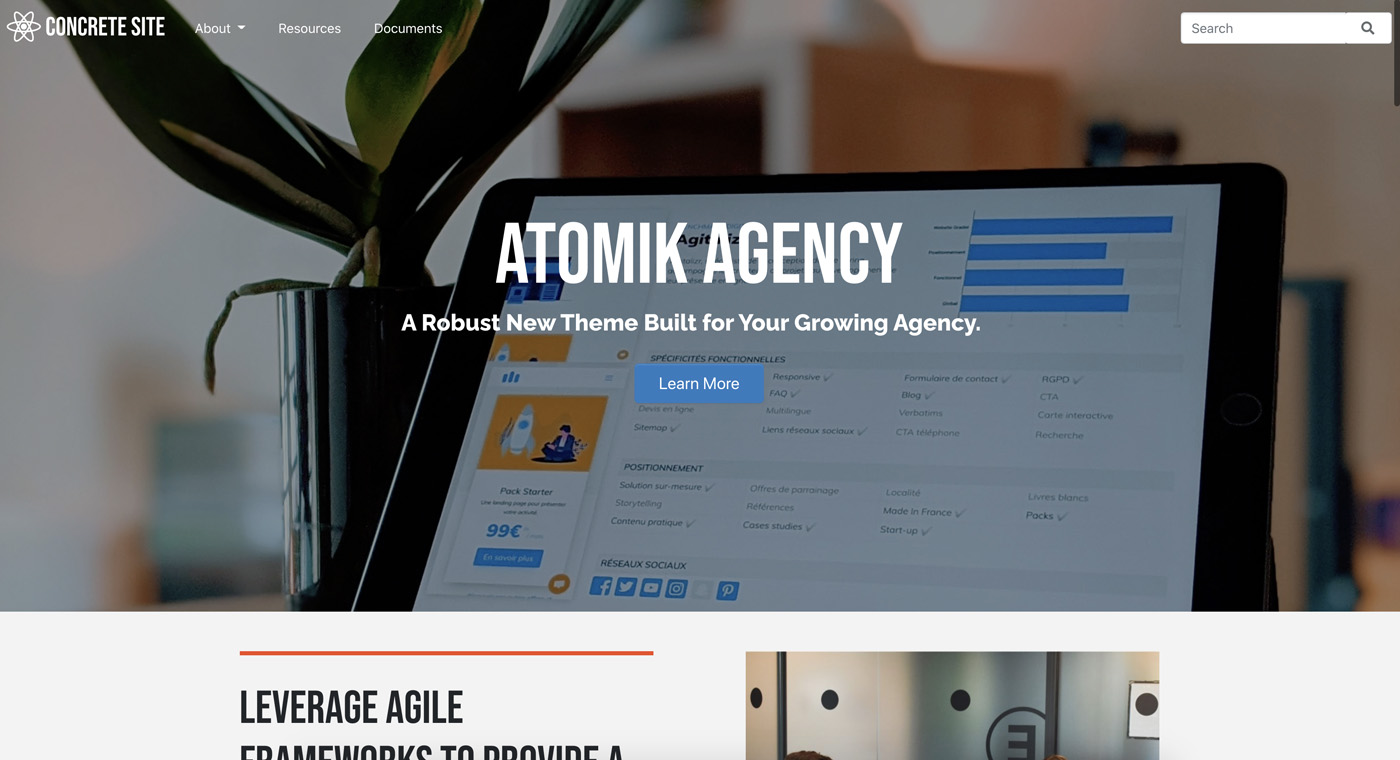 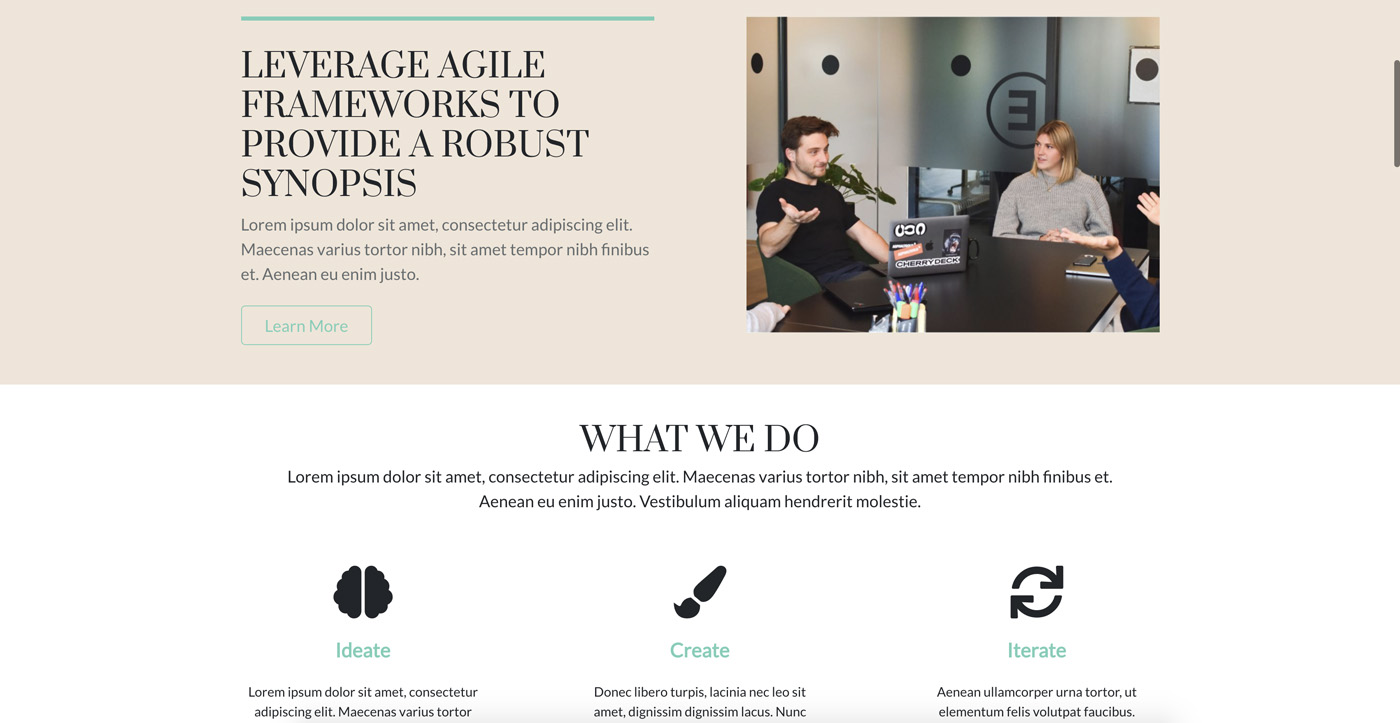 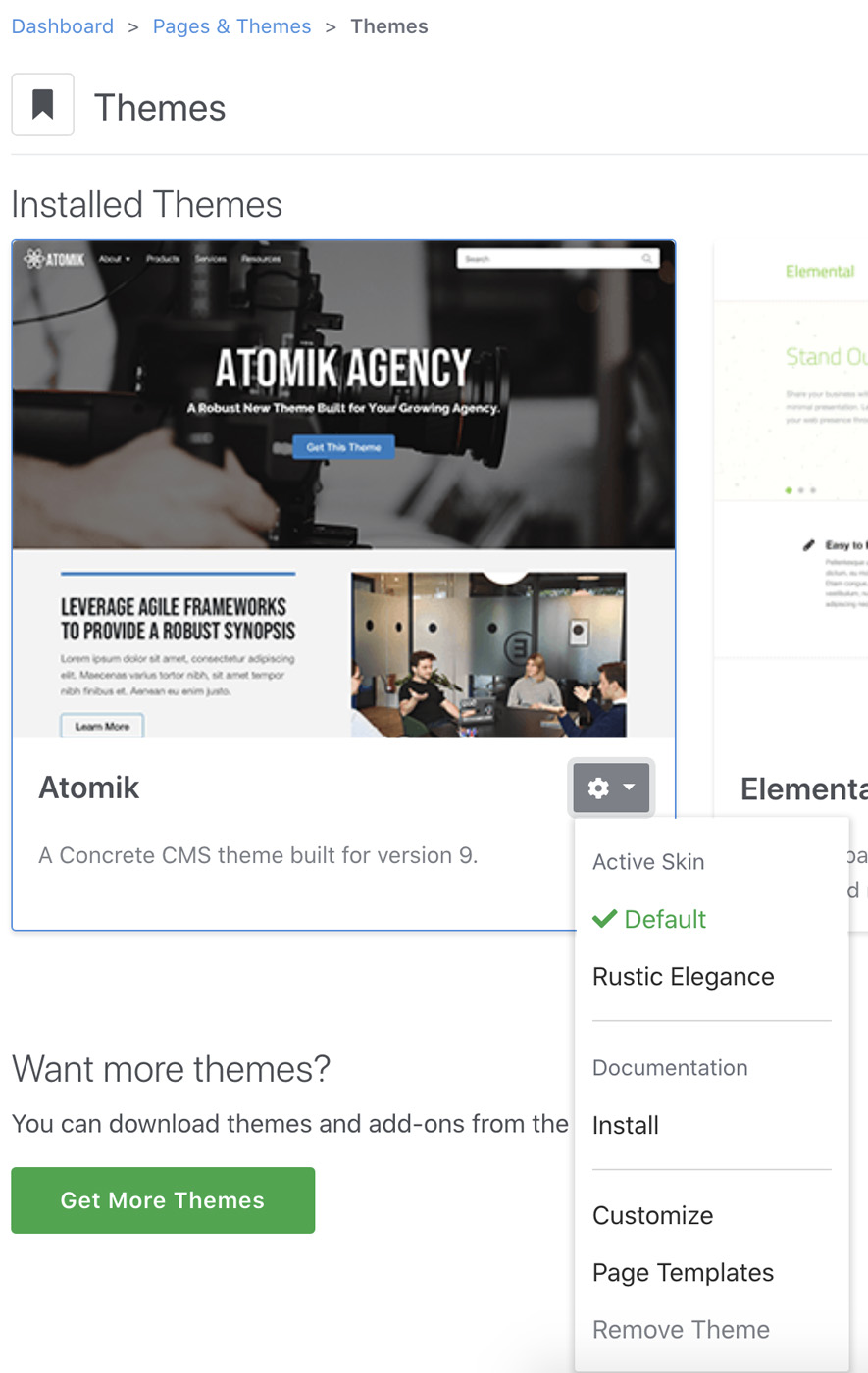 Here's how you can add skins to your Flintstone theme.

First, let's restructure our project directory. Instead of using a single entrypoint, main.scss, we're going to move our entrypoint a level down, into a new skins directory. So create a new directory named skins in the root of your theme development directory. Next, create a directory within skins named default for our first skin, and move main.scss into it. The default skin of any theme must be named default.scss, so it makes sense to name the corresponding directory housing that skin's entrypoint to default. Finally, move the _variables.scss file that houses the skin's customized Bedrock SASS variable into the default directory as well.

Next, we need to update main.scss, which we've moved into a sub-directory, so that it pulls the centralized features SASS from the new relative location. That means adding ../../ in front of any files that had been in the same directory. Our main.scss should now look something like:

Update webpack.mix.js to Reflect the Changes

Now, let's make sure everything still works generally. Re-run npm run production, wait for the assets to rebuild, and reload your site.

This is what we would expect – since our styles have moved but we haven't updated the theme itself (it's still referencing main.scss) we're going to have a site with completely missing styles.

Update the Styles Include

Let's fix this broken style. Styles are included in our header.php, so let's open that file. Open header.php and find this line:

This hard-coded line needs to change. Swap it out with this:

This method is the single line necessary to support skins within your theme. It's also used to support fully customizable style sheets – but more on that later.

And we're back! Furthermore, if you go into Dashboard > Pages and Themes > Themes, and click the settings next to our Flintstone theme, you'll see that skins are now registered and functioning. 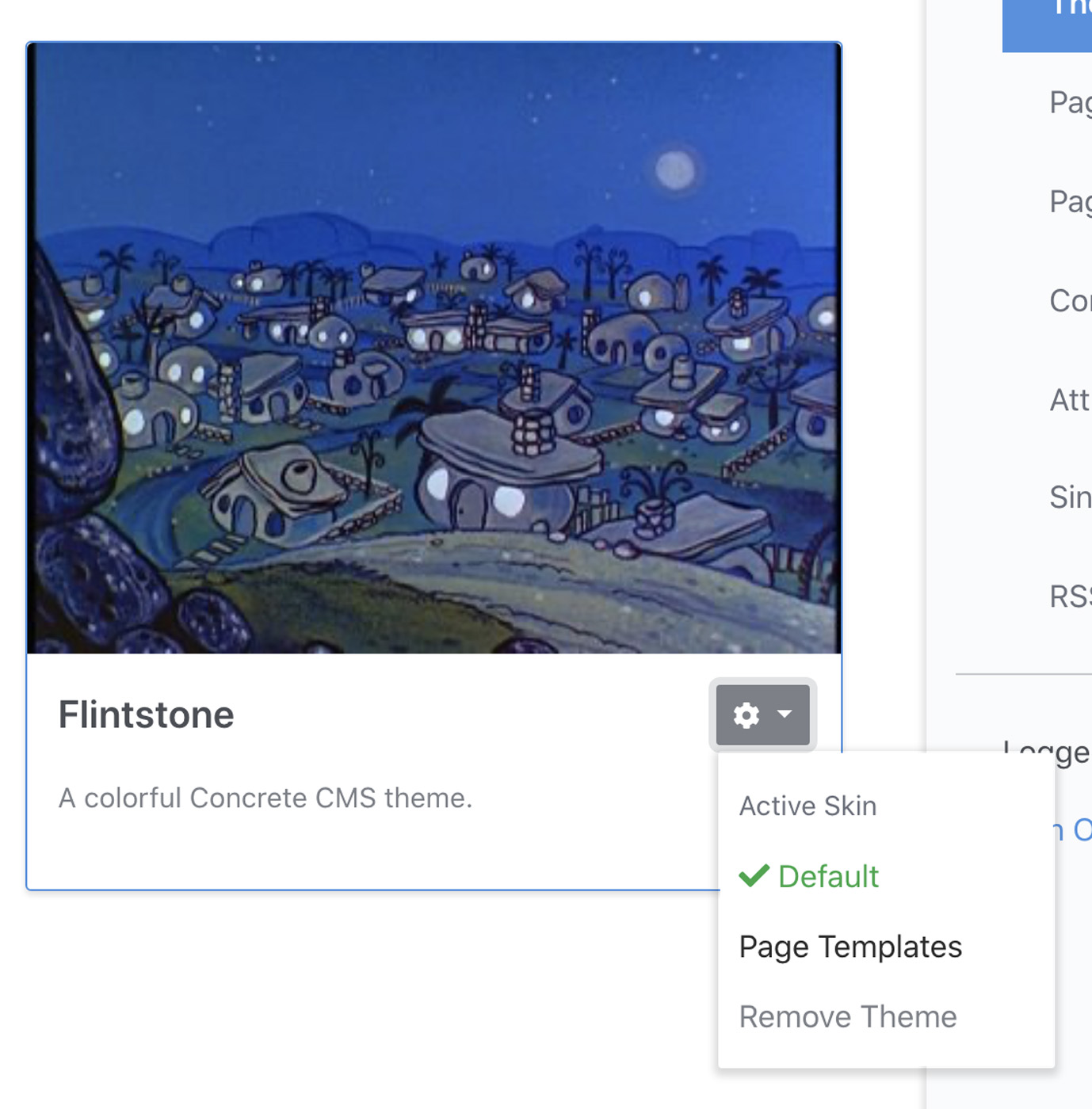 Unfortunately, we only have a single skin, which isn't super useful. So let's add a new one. If we've modeled our original theme, and hence our first skin, after Fred Flintstone, it makes sense that we model our second skin after his wife, "Wilma" 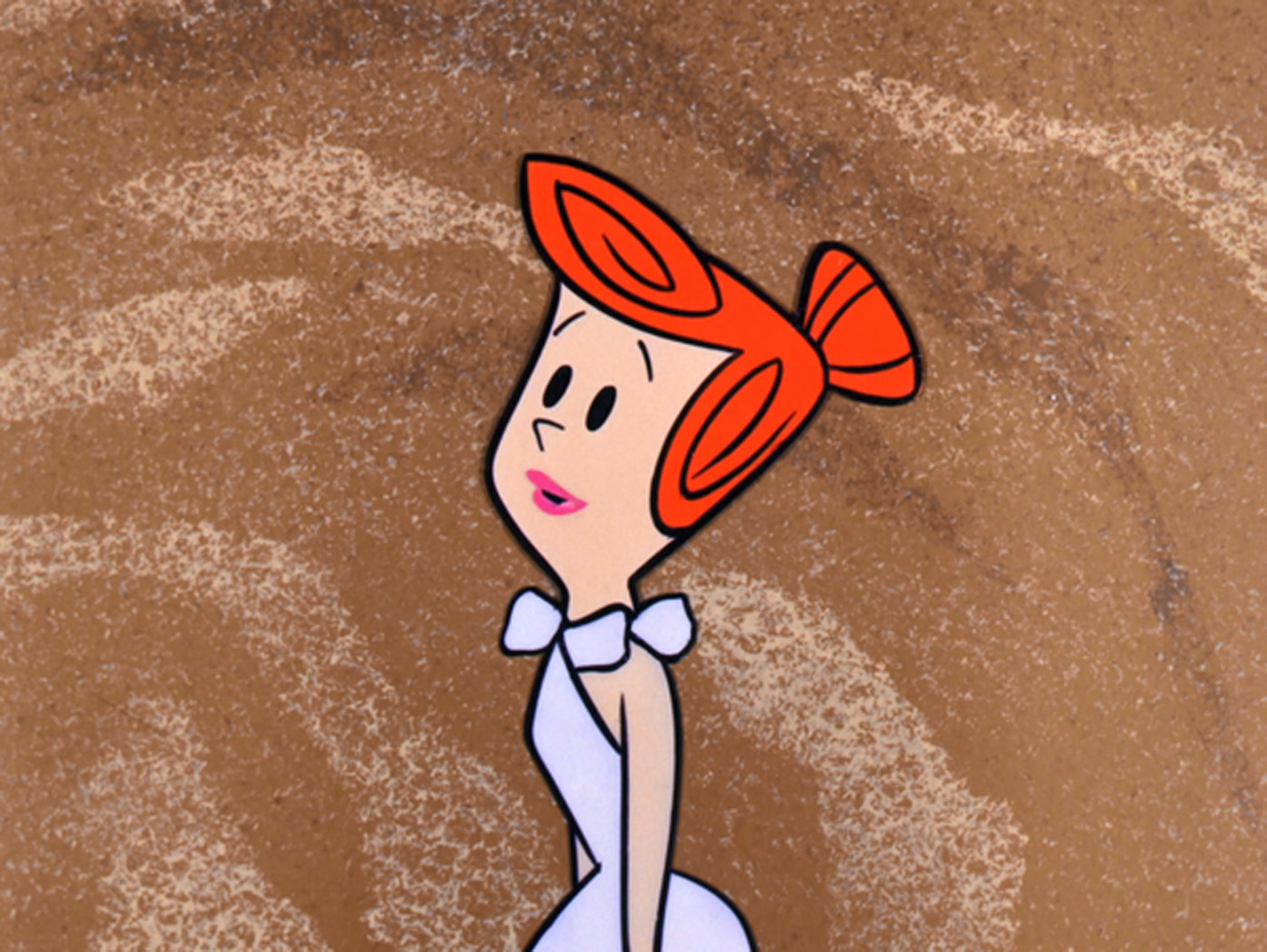 First, let's duplicate our default directory into a new directory named wilma. Our filesystem should now look like this: 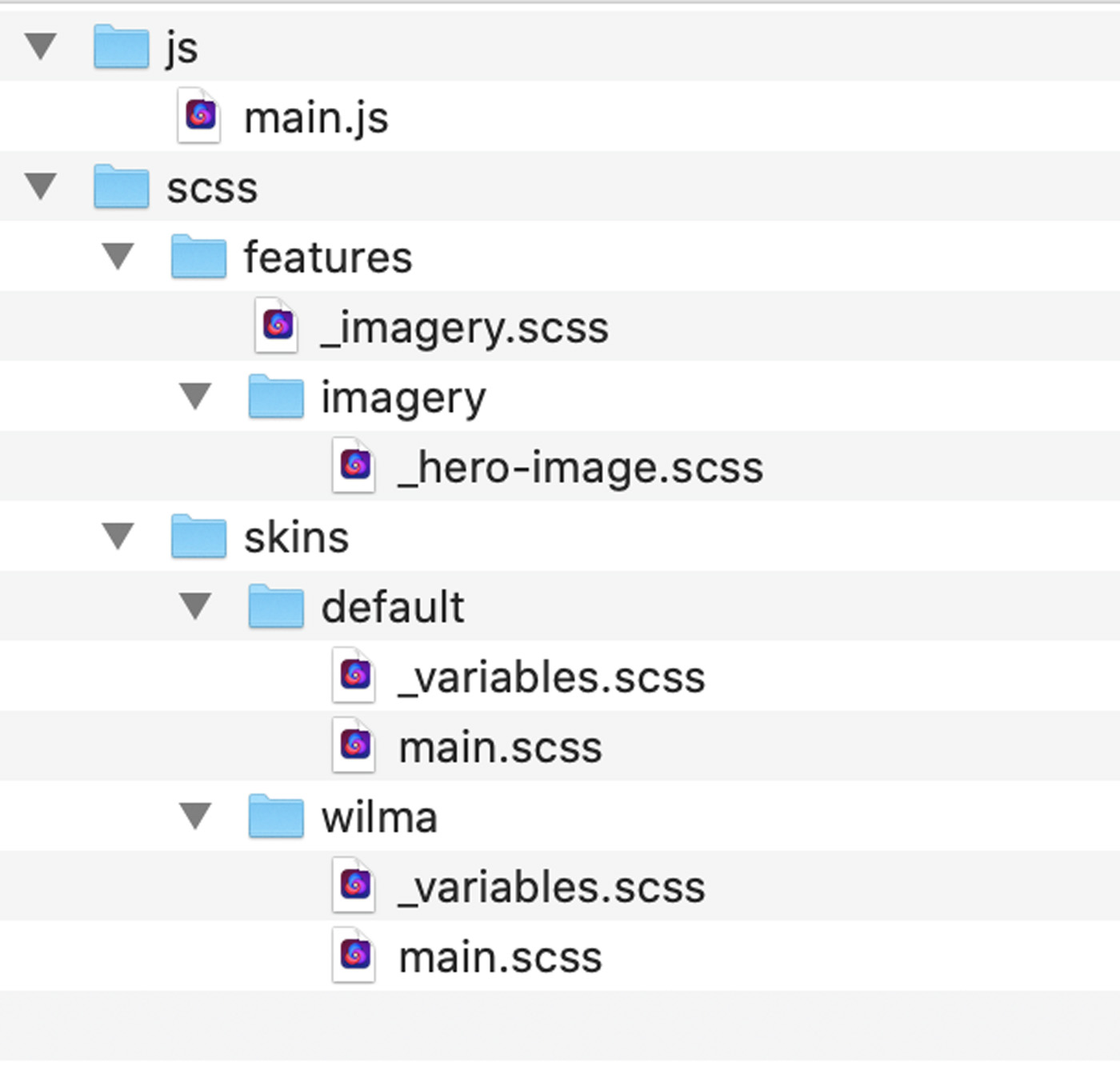 Open the _variables.scss file within the wilma directory. These are the original SASS variables powering the default skin, since we just copied them from there. Let's customize some things. Let's change these variables:

Into some variables that correspond more to Wilma's color palette. I'll swap them out with these:

Now, let's add this new skin to our webpack.mix.js:

And re-run npm run production. Wilma should now be included in the list of files output by Laravel Mix.

And when we go into Dashboard > Pages and Themes > Themes and interact with our Flintstone theme, we should now see our new skin ready for use. 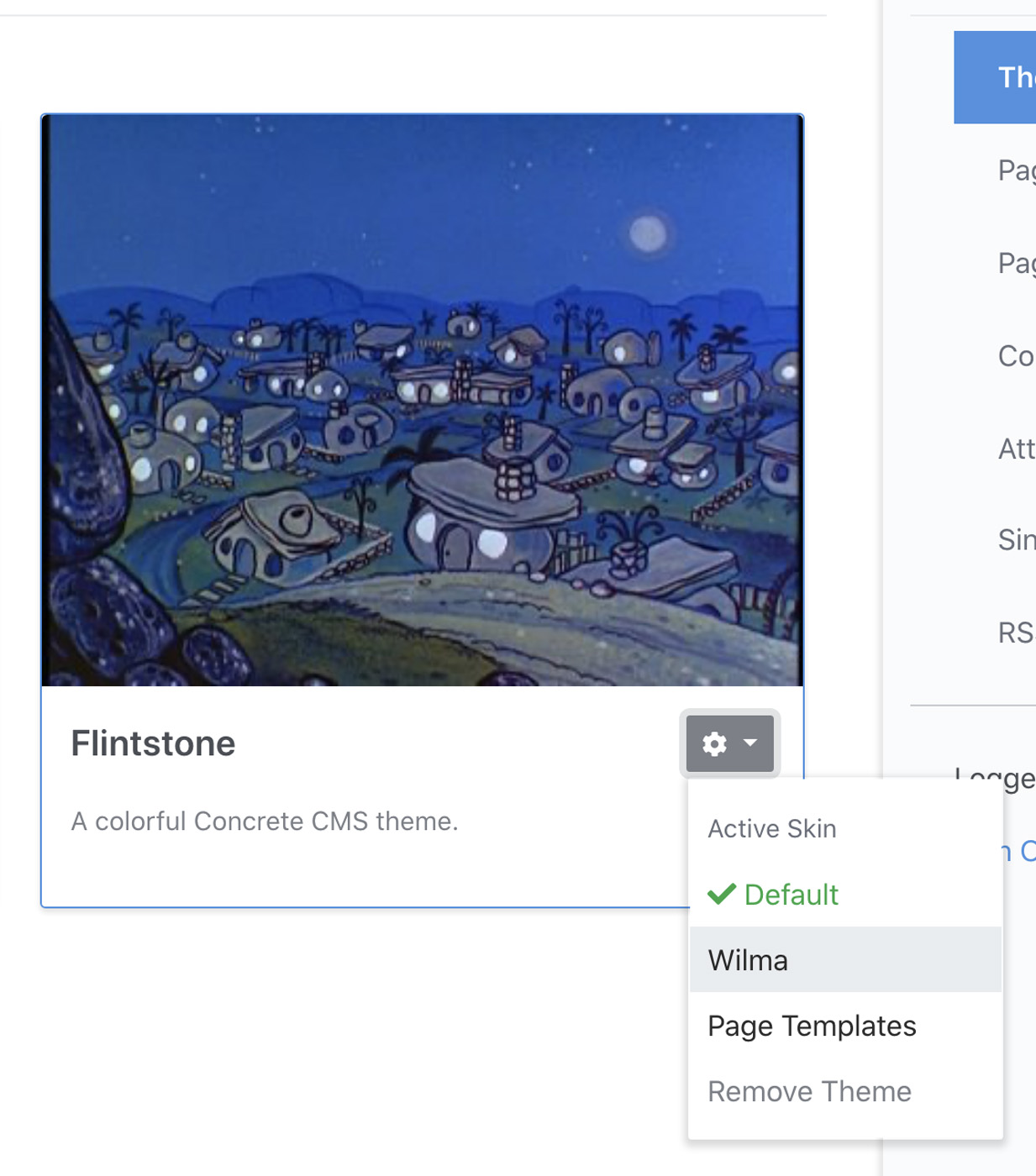 Activating that skin should put it into place on the site, with all of its modifications:

That's it! You've made a Concrete CMS theme skin.

The Atomik theme that ships with Concrete CMS shows an example of this pattern, and it's recommended.

We built this theme with Bedrock to show how easy it was to use SASS customization to build skins – but there's nothing specific about this process that requires Bedrock, Webpack, CSS customization or anything of that nature. All theme skins require is that skins be present within a css/skins directory inside your theme. If they do so, they'll show up in the Dashboard, and you'll be able to select them. Bedrock was a convenient way to show how to build something like this, and we hope you'll use Bedrock to build your themes, but skins do not require it and can be created in a completely custom manner if you so choose.

In our examples we're modifying a couple variables but keeping the CSS shared between skins fairly homogenous between skins. There's nothing that requires this, however. Again, the contents of the css/skins directory are just CSS – there's nothing that requires them to be mostly the same between them. If you wanted to add a bunch of custom CSS within the "Wilma" skin that wasn't in the default skin, you're free to do so.

With skins, we think Concrete will continue to be a useful platform for solving real-world web problems. Skins should be useful for theme developers who want to give customers lots of choice when working with their themes, but we hope they're also useful to companies and organizations that want to ship a unified look to their site, while offering site editors some choice. We can't wait to see what you do with the feature.

The source for this, and all other Bedrock theme work described in this section, can be found on GitHub in https://github.com/concrete5/theme_bedrock_documentation.